After being locked down for so long, Disney has had to find new and innovative ways to make money in their parks. Through extensive undercover research, here's what I've found.

Copy the code below and paste it on your web site, blog, or anywhere you can input HTML to share this song.

Odor in the Fridge

Hear more songs from the community in The Sideshow!

“Old Godzilla was hopping around Tokyo City like a big playground…”

Needlejuice Records is proud to reissue Dinosaurchestra in its first physical release since 2006. Newly remastered by Angel Marcloid (Fire-Toolz), Dinosaurchestra is presented as a deluxe colored 2LP set featuring bonus tracks and a poster, a two-CD set with an entire disc of bonus material, and cassette. This release will delight Lemon Demon fans new and old, preserving this special period of Neil’s career for all to enjoy.

7″ companion Acrobat Unstable Record available here. Featuring 6 bonus tracks not available on the Dinosaurchestra vinyl, this EP was curated by Indie Cindy herself and is held together by broken synthesizer keys, cassette tapes and burned CDs. Complete the Dinosaurchestra experience with this beautiful 7’’.

Nominations for the 2022 Logan Awards Are Now Open!

Nominations for the 2022 Logan Awards are now open!! Nominate your favorite comedy songs and music videos that were released in 2021. Click the nominations link at the top of the main page (LoganAwards.com) to add your entries. You will need to log in to Google for this. There is a minimum and maximum of 5 nominations per person. Nominations will close on January 22nd, 2022, so hurry and get your nominations in now!

Needlejuice Records is taking to another Kickstarter vinyl campaign, and this time it's for both VS. EVIL and Nerdvana by Ookla the Mok!

Ookla the Mok's VS. EVIL is a supervillain-themed concept album centering around the Marvel and DC universes. Ookla the Mok combine their signature comedy music abilities with the emotional narratives behind these fictional characters in a way that we think works super well. While tracks like "Doctor Octopus" and "Kang the Conqueror" are among some of Ookla's most overtly silly works of music that poke fun at the comics they love, other tracks like "Suprema Lex" and "Amora Adores Thor" bring out Ookla's passion for the stories that inspire them. To top it all off, the album artwork is done by DC Comics artist Art Baltazar. The album will be brought to vinyl for the first time, giving it the gatefold treatment to show off Art Baltazar's artwork. A brand new piece of artwork will be included inside the gatefold panels. A lyric insert will be included as well. During this Kickstarter campaign, we will be offering two different vinyl color variations of this LP: "Split Personality," a villainous purple and yellow split vinyl, and "Super Splatter," a comic book green splatter vinyl. As silly and whimsical as this album is, there is a lot of care and passion put into these songs by Rand and Adam, and they have poured their hearts into these songs.

It doesn't just stop there, though! When Ookla the Mok released this album, they did so alongside a companion EP called Nerdvana, containing a few outtakes from this era that didn't fit so much into the "super-villain" theme. "Welcome to the Con" will make every comic book nerd feel at home, "Math" will teach you in TMBG-esque edutainment fashion, and "Tantric Yoda" might be the one of the silliest songs in the Ooklaverse. We aim to bring this Nerdvana EP to physical formats for the first time ever! On vinyl, it will be a purple and orange galaxy vinyl, with a lyric insert included. And since it's never been released on CD before, with this Kickstarter we plan to finally make that happen.

Back the project here.

Musical by Lauren Mayer Being Produced

A new musical co-written by Lauren Mayer and Diane Sampson is being staged and will be performed three times with a live band the weekend of December 10th and 11th.

The show, titled Living Large, is about the life and career of Marie Dressler, a movie and Vaudeville star of the early 20th century who was a pioneer for women, broke all kinds of molds, and achieved her greatest success when she was in her 60s. 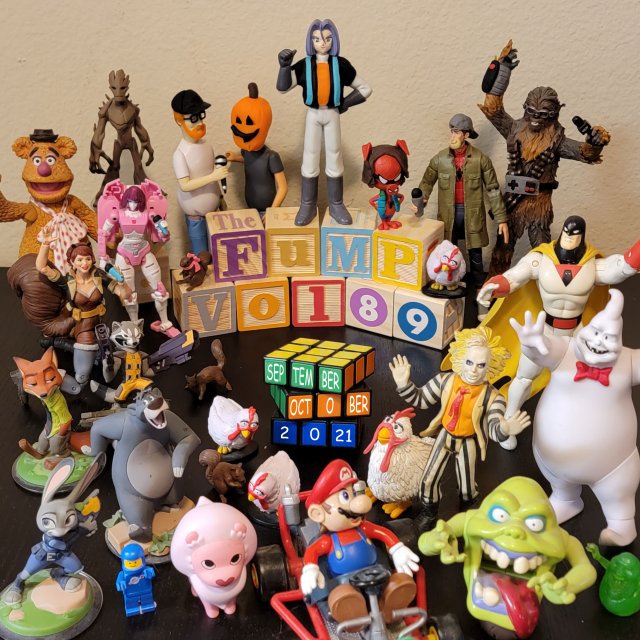 The FuMP Volume 89 is now available and includes all the songs posted to The FuMP during September and October of 2021, including a new batch of Halloween songs, more random weirdness by the usual weirdos, and the first new song by the great Luke Ski in far too long. Plus, this album also includes a video of Insane Ian performing "Dungeon Castlevania" at FuMPFest 2021.

Click here for more information or to order your copy.