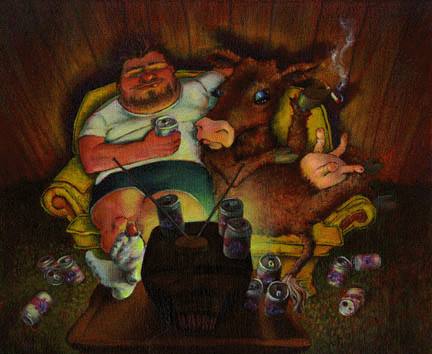 One hot summer day while wrestling banjos one managed to escape. One bit one of the banpoke watching causing serious damage to his seance of timing and pitch. It was naturally assumed he had gotten all the powers of a man sized banjo. With the newly discovered powers he went out into the world and was quickly eaten by a bear. That bear got a really bad case of gas and ended up suffocating a groundhog. When that groundhog died he fertilized a special patch of grass which turned out to be the first food a newborn calf ate. That cow would later grow up to be president of a hardware store in Ohio. True story. It really has nothing to do with groundhogcow but I like telling the story. Anyways I am a lunatic with a banjo. Songs sometimes fall out of me.

For more information on Groundhogcow please visit the artist's web site at: http://www.groundhogcow.com

Why I don't Drink Mountain Dew